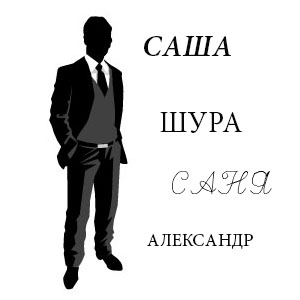 Names are usually not given much attention in textbooks or Russian language lessons. But at the same time, the ability to understand them and to use them properly is very important for successful socialising and building up relationships.
Share on facebook
Share on twitter
Share on linkedin

Names are usually not given much attention in textbooks or Russian language lessons. But at the same time, the ability to understand them and to use them properly is so important for successful socialising and building up relationships!

How many names does a Russian person have?

Sasha, Sashka, Aleksandr Alexandrovich, San Sanych, Sanya, Shurochka, Shurik, Sashok, Sashenka! Could it be the same guy? I am afraid so… and some of those names can even belong to a girl. I am sure foreigners are often confused by Russian names. I would be. How do you know, when reading a Russian book, that Mikhail Ivanovich on page 10 is the same guy as Misha on page 12?

First (Christian) names are usually traditional. They come from the Bible, or can be of Greek (most names, in fact), Latin or old Slavic origin. For example, Pyotr (Peter) is Biblical and Greek, Viktor is Latin, and Olga, Boris or Vladimir are Slavic. I think that the most common Russian male name is Sasha (Alexandr) and most common female one is Natasha (Natalya). There are a few unisex names in which we just change the ending to make them feminine – the most common pairs are Alexandr and Alexandra, Valentin and Valentina, Valery and Valeria.

Almost every full Christian name has a diminutive form, not necessarily shorter, but affectionate, used by friends and family of a person. And that’s where the confusion may arise because sometimes a diminutive looks nothing like the full name!

Alexandr is Sasha, and Alexey is Lyosha, Dmitry can be both Dima and Mitya, and Margarita is Rita. Although, to be fair, diminutives are usually very similar to the full name. One more interesting thing is that, apart from the “official” diminutive, there can be lots of affectionate “unofficial” names created out of the full first name. The Russian language is very creative and lends itself easily to making all sorts of silly sounding sweet little words! It’s rich in diminutive suffixes and very good for expressing affection. So Tatiana can be Tanya (“official” diminutive), Tanechka, Tanusha, Tanushechka, Tatyanochka, Tanura (all more affectionate than the usual diminutive) – whatever someone fancies! And then there is Tanka – the suffix “ka” implies familiarity and sometimes a lack of respect!

The patronymic is one’s middle name. To form a patronymic, you need to take your father’s first full name and add “ovich” or “evich” to it if you are a man, and “ovna” or “evna” if you are a woman. So, a son of Ivan will be called Ivanovich and a daughter will be called Ivanovna. Patronymics are used in combination with first full names and imply respect and distance between grown up people. So, for example, it’s traditional to address your boss, a doctor, a teacher, a senior colleague, parents-in-law using their name plus patronymic. When I taught English in Moscow my students called me Vladilena Anatolyevna. It would have been totally inappropriate for any of them to call me Vlada – this tradition is rooted so deeply in the culture that people wouldn’t even think of calling a teacher by the first name!

Sometimes, when you are dealing with a few people you’ve just met in a formal situation, it’s quite difficult to remember their names and patronymics straight away. So to be on the safe side, I would normally take notes: the guy in grey is Boris Petrovich, and the lady in blue is Svetlana Alexandrovna…

All this said, foreigners are exempt from using patronymics, because everyone understands that they are difficult to pronounce and to remember. So for those foreign students who are doing Russian lessons in order to work with Russians or travel in Russia, it’s not necessary to learn and use people’s patronymics. Using the first full name will be quite enough.

When I tell my students about Russian patronymics, they sometimes ask: what happens if a kid’s father is not around or unknown? In that case, the mother can choose the patronymic she likes. It is usually her own patronymic, so the child gets the middle name from granddad.

The last name is the surname. Typical Russian surnames end in “ov” for men and “ova” for women: Ivanov and Ivanova, Smirnov and Smirnova. Another common ending is “in” and “ina”, such as Eltsin and Eltsina, or “skiy” and “skaya”, such as Chaikovskiy and Chaikovskaya. Russia has always been an agricultural country rich in forests and animals, so lots of Russian surnames come from words for animals, fish, birds, crops, creatures of the forest and the river. For example, Medvedev(a) is “bear”, Zaitsev(a) is “hare”, Lisov(a) is “fox”, Morozov(a) is “frost”, Orlov(a) is “eagle” and so on…

And, of course, with Russia being a multinational multicultural country, there are a lot of foreign names: a lot of names coming from other Slavic languages such as Ukrainian or Polish, as well as Asian, Western European, Tatar and all sorts of other origins.

Just like in the rest of the world, Russian names are influenced by fashion and pop culture. For example, in the 90-s a lot of Mexican and other south American soaps made their way to Russian TV, so there were cases when people called their babies Louisa or Ricardo… In the recent years, some old fashioned names have become popular again: Egor, Artyom, Daniel, Anastasia, Sophia, Darya.

Curiously, a person’s full name may contain individual parts (name, patronymic, surname) from different languages. For example, when I was a student, one of the teachers was called John Ivanovich. How’s that for a clash of cultures!

Can one’s name be changed?

If someone hates their name or part of it, it can be officially changed at the passport office to any name you like. Sometimes Russian surnames are derived from unpleasant sounding words or even swear words! Women usually adopt their husband’s surname when they get married – although I know a lot of women who didn’t (including myself!) Or, a husband can adopt his wife’s name, if he wishes to. I was once working in Moscow in the university admissions team, helping applicants to fill in forms, before they went through with entrance exams. One of the points on the form was “mother’s maiden name”, and one guy came to me and asked – “Can I put in my father’s maiden name instead?” – “What?!”- “But he is the one who changed his surname!”

Names are a fascinating subject, and we would be happy to tell you more in one of our cultural awareness courses.