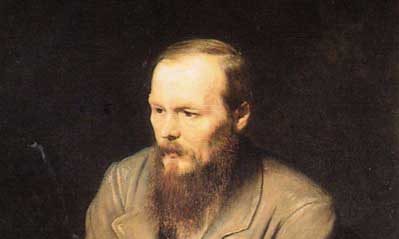 "Am I a shivering little creature, or do I have the right?" These words, famously said by Rodion Raskolnikov in Crime and Punishment, always come to my mind when Dostoyevsky is mentioned.

Am I a shivering little creature, or do I have the right?” These words, famously said by Rodion Raskolnikov in Crime and Punishment, always come to my mind when Dostoyevsky is mentioned.

The difficult questions of life and death

Perhaps they had an impact on my teenage mind when I read Dostoyevsky at school. Or, more likely, they were drummed into my head at school so firmly that I will never forget them. These are great words… apart from the fact that the right in question is the right to kill an unpleasant old lady who, although being a ruthless usurer and a repulsive person, has not done anything criminal herself. Does one dare to take justice into one’s own hands? And if one does, what gives one the right to judge who deserves to live or die? And what consequences can “having the right” lead to?

As you can see from the nature of these questions, Dostoevsky is a representative of “heavy” literature, so do not expect to be entertained by his works. Expect to be made to think and become wiser…

Dostoyevky is by far the gloomiest of all Russian writers. Apart from the tragic life circumstances that haunted him, he must have had a certain gloomy disposition of character to create such dark works. He is very typically intellectually Russian – tormented by self-doubt, contemplating, philosophising, creating the worst case scenarios – a thinker and not an action man. He makes you think about existential questions – the meaning of life, the impact of your actions on other people, your moral stand in life. Friedrich Nietsche, in his work The Twilight of Idols said that Dostoyevsky was the only psychologist in the world he could learn from.

A curious fact to add to the gloomy nature of Dostoevsky’s spirit: a few years ago the Moscow underground opened a new station dedicated to the writer, called Dostoyevskaya. It is dark and decorated in gloomy colours. Within a few months of opening, it became a favourite station for committing suicide!

The only significant work by Dostoyevsky that I haven’t read myself is Demons (“Ð‘ÐµÑÑ‹”). I simply couldn’t face it. It is too heavy even for me – an old school Russian academic, educated in the spirit that “real” reading should not be pure fun.

A few facts about Dostoyevsky’s life

Fyodor Dostoyevsky was born in 1821 in Moscow. On his father’s side, he came from an old pedigree family, descendants of a Tartar prince who adopted Christianity in the 15th century. The family name Dostoyevsky is derived from the name of the village Dostoyevo granted to one of his ancestors. Unfortunately, the writer’s father was an abusive drunk and got killed by his own serfs. The writer’s mother was a nice kind woman, from a rich merchant’s family, but she died young, when Fyodor was 16. After his mother’s death he was sent to St Petersburg to be educated as an engineer. He learned the news of his father’s death when he was there.

Dostoyevsky’s first literary work was the translation of Balzac’s “Eugene Grandet” (1843) into Russian. A year later, his first own work, The Poor Folk (“Ð‘ÐµÐ´Ð½Ñ‹Ðµ Ð»ÑŽÐ´Ð¸”) came out, and he became famous instantly. An influential literary critic, Belinsky, gave a very favourable assessment of this work. But soon after that, disaster struck. The young writer was arrested for spreading subversive materials about religion and the government, and sentenced to being stripped off his property and executed by firing squad. It turned out later though that the death sentence was a psychological trick, to break the morale of the accused. At the very last moment he and several other people were pardoned and the death penalty was replaced by prison and exile. One of the accused, called Grigoryevsky, could not stand it and went insane. Dostoyevsky described the feelings and thoughts that he had just before the “execution” in one of his novels, The Idiot.

The writer spent 4 years in a forced labour camp in Siberia. He was then freed and sent to serve in the army in Siberia as a private. When the emperor Nicholas the 1st died a year later, Dostoyevsky wrote a sycophantic poem dedicated to his widow, and got his officer status restored. As a result of his ordeal, Dostoyevsky turned into a deeply religious person whose only ideal was Jesus Christ. He carried on writing, and in 1860 was able to return to St Petersburg, with a wife and an adopted son whom he had acquired in Siberia.

The most well known works by Dostoyevsky

A russophile and a gambler

In the 1860-s Dostoyevsky went to Europe (Baden Baden) with a lover, called Apollinaria Suslova, and got into the habit of gambling. Living abroad, he became a Russophile, criticising bourgeois values and the Western way of life. He was destitute and had to hide from his Russian creditors.

Life became better when he married for a second time, after the death of his first wife. His second wife was his secretary, a practical person who organised his life and helped him to give up gambling.

The last 8 years of Dostoyevsky’s life spent in the town of Staraya Russa of the Novgorod region, were the quietest and the most productive from the literary point of view. In 1878, as a gesture of recognition of his work, the emperor Alexander the 2nd invited Dostoyevsky to his palace and introduced him to his family.

A vast range of moral and philosophical questions

Dostoyevsky is not one of my favourite writers but his works are fascinating. The Karamazov Brothers, for example, brings up such a huge number of moral and philosophical questions that you can spend years thinking about them. The most famous piece from this novel is probably the insertion that is not related to the plot – the tale of the great Inquisitor who executed Christ himself in the name of Christ. The Inquisitor realises that the person in front of him is Jesus Christ himself, who came to Earth for the 2nd time, but he still cannot pardon him.

Crime and Punishment is a “school work” that all Russian children used to read and analyse. (I am sure most of them don’t any more – it’s hard work, and you can read the story line and the explanations on the net!)

A penniless student, Rodion Raskolnikov, kills a nasty old lady who exploited people’s misfortune – she worked as a pawnbroker/usurer and lent money with a huge interest rate. The crime is well thought out and carried out successfully but – he had to kill her meek and harmless sister too, just because she happened to witness the crime. After perpetrating the crime, he could not stand his own thoughts and pangs of consciousness and turned himself in. Parallel to the main plot, there are a number of side-lines, with some wonderful characters, such as Sonya Marmeladova and her family, consisting of a useless drunken father who spends the family’s scant money on drink, a vicious but deeply tragic stepmother ill with consumption and a couple of her kids, permanently scared and abused. Sonya, a pure and honourable girl, has to become a prostitute to keep her family alive, and Raskolnikov worships her. Later, when he is convicted (something not included in the novel itself but meant by Dostoyevsky as a continuation of the story) and sent to prison in Siberia, Sonya follows him. Her whole life is self-sacrifice, and it’s for the reader to decide whether this sacrifice is justified.

Dostoyevsky makes us think, he is a brilliant philosopher and psychologist, but he is not the greatest master of style and does not write impeccably. In this day and age, we are not allowed to criticize him, his fame and reputation is set in stone, but his contemporaries noted his clumsy sentences and mismatched epithets – such as “in the room there was a round table of the oval shape”.

Reading Dostoyevsky is an effort worth making

In brief, next time you feel that your life has been a failed one, and you’ve reached the end of the road – read a bit of Dostoyevsky. He will show you that it could have been much worse, and your feelings are quite normal.

That said, it may take you a lot of Russian lessons to be able to read Dostoyevsky in the original, but I promise it is worth it!