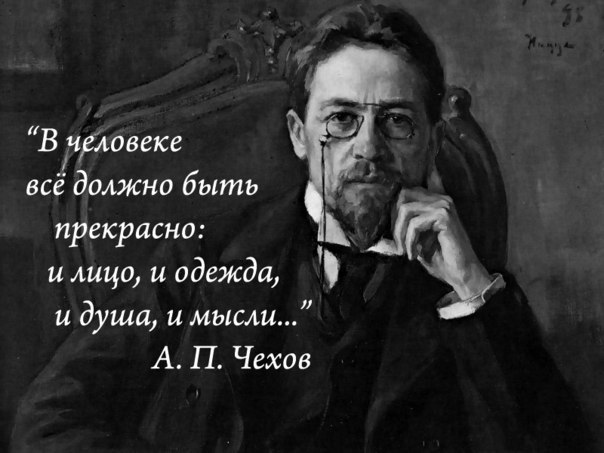 "Everything should be beautiful in a person: their face and clothes, soul and thoughts." These words, spoken by Doctor Astrov in the Chekovian play "Uncle Vanya", are well known to every Russian.

Everything should be beautiful in a person…

“Everything should be beautiful in a person: their face and clothes, soul and thoughts.” These words, spoken by Doctor Astrov in the Chekovian play “Uncle Vanya”, are well known to every Russian. When I was a schoolgirl in Moscow, these words were hanging above the stage in the school conference hall. We stared at them every time we sat there in school meetings, so we learned them by heart for the rest of our lives. Now that I think of it, what we learned is that you can (and should) be a high brow intellectual and a spiritual person and look great at the same time – how cool is that?

A true representative of Russian intelligentsia

On a serious note, every Russian knows Chekhov as a great humanist and an outstanding representative of what we call “intelligentsia” in Russia – a class of well educated liberal minded intellectuals, well known for their refinement and decency. Here is another quote (abridged), from Chekhov’s letter to his brother, defining the Russian idea of intelligentsia: “Well brought up people … respect a human personality, and therefore they are always forgiving, lenient, polite, accommodating… They do not make a big deal out of a lost trifle… They respect other people’s property, and therefore they always pay their debts. …They are not talkative and do not tell you what you don’t want to know. Out of respect for other people’s ears they are often silent. … They are not vain. They are not interested in such false jewels as the acquaintance of celebrities. … They cannot fall asleep in their clothes, see cracked walls, breathe bad air, walk on dirty floors, eat out of a pot…”

Here are some facts of Chekhov’s life: Anton Chekhov was born in 1860 in Ukraine (Taganrog). He was a man of two professions – a doctor and a writer, in his later life married to an actress who performed in some of his most famous plays. Through the years, the theme of being unfaithful to medicine comes up again and again in his works. “Medicine is my lawful wife, and literature is my mistress. When I am bored of one, I spent the night with the other.” As a result, in 1902, the Congress of Russian doctors commended Chekhov as a writer for creating truthful images of doctors and their work.

Chekhov was educated in a Gymnasium in Taganrog. Still being at school, Chekhov edited humour magazines and came up with amusing captions for satirical drawings. Curiously, his maths teacher at school was Edmund Dzerzhinsky, father of the infamous Felix Dzerzhinsky, founder of the KGB. What a small world…

The Gymnasium (that’s what Russian grammar schools were called at that time) gave him a lot of material for his stories: colourful figures of school kids, teachers, hypocritical parents, dysfunctional families… All of them would later appear in the pages of his short masterpieces.

Chekhov graduated from the medical faculty of Moscow University and worked as a GP in a surgery not far from Moscow. Later on he lived mostly in Moscow and in his country estate of Melikhovo, near a town now called Chekhov, which houses his biggest museum. Towards the end of his life, he lived in Yalta (a town in the Crimea, on the Black Sea, with a very mild climate) for the sake of his health which was deteriorating: sadly, he had chronic tuberculosis for many years and died at the age of 44.

Chekhov’s trip to the island of Sakhalin

In the winter of 1890 Chekhov went to the remote island of Sakhalin, in the east of Russia. To get there, he had to travel through Siberia for several months. At that time he wrote 9 essays called “From Siberia”.

It’s not clear why he took a decision to undertake such a physically challenging project. That trip critically damaged his health, and the harsh climate of the region, together with the stress and discomfort of travel, undermined his strength. He stayed in Sakhalin for several months, talking to people, including convicts who had been exiled there, and created thousands of cards with information about the population of Sakhalin. He inspected the state of prisons and hospitals there (which was grim) and in the following 5 years wrote a book “The Isle of Sakhalin”.

Chekhov died in Germany where he was staying at a resort. Being a doctor, he knew exactly when he was going to die, and according to his wife, when the time came, he sent for his doctor and in his presence drank a glass of champagne with the words “I am dying” and “I haven’t drunk champagne for a long time”…

The peculiarity of Chekhov’s plays

The peculiarity of Chekhov’s plays was quickly noticed by his contemporaries. His critics talked of his inability to create a play with a proper plot, of a lack of action and disjointed dialogue, of too many unnecessary details. Here is what Chekhov himself says: “It is required that there should be an impressive hero or heroine in a play. But in real life people do not shoot or hang themselves or declare love every minute. Nor do they say clever things every minute. Instead, they mostly eat, drink, flirt, say stupid things. So it’s necessary to show this on stage. … On stage, let it be as complicated and at the same time as simple as in real life. People are having lunch, just having lunch, but at this time their happiness is being created or their lives are being broken.”

In Chekhov’s dramas, contrary to the previous tradition, dramatic events are less important than daily routine. All his plays have detailed descriptions of everyday life, through which the readers should be able to see the nuances of the characters’ feelings, moods and relationships. The choice of such descriptions of everyday life depends on their relevance for characterisations. Characters often say “random” lines, the dialogue gets broken and messy, and seemingly insignificant details come out. So at first sight, it makes no sense. The significance of such dialogue is not in its literal meaning, it’s in the life perception that it reflects. This phenomenon was called “the undercurrent”. Behind insignificant routine behaviour, there is a constant undercurrent of emotions and tensions, and it’s up to the actors to show it to the audience.

The “stream of consciousness” in Chekhov’s works

It is said that Chekhov was the first to use the “stream of consciousness” (a seemingly disjointed inner monologue of the character) which was later taken over by James Joyce, and other modern writers. Also, Chekhov does not give any moral verdicts at the end, which was so typical of the genre of short story at that time. Not giving any definite answers to his readers, Chekhov thought that the writer’s role was to ask questions rather than answer them.

I must say that when I first read “The Cherry Orchard” as a teenager, it made me cry. I sympathised with the characters and could identify with them. Having read pieces of it recently with my students of Russian here in London, I felt nothing but irritation towards those characters. To an adult they seem feckless and stupid, and what happens to them is obviously predictable. And at risk of being unorthodox, I will say that most Russians love Chekhov’s early short stories much more than his serious works.

The Russian language created by Chekhov

From the point of view of the Russian language, Chekhov’s works are beautiful. There is a well known fact that young writers used to be advised to copy by hand Chekhov’s stories, to get a feel for style and how to write. His short stories are charming and funny. They have been adapted many times and published in many textbooks as easy reading for students of Russian. Russian teachers frequently use his stories as reading material, so you are very likely to come across them in your Russian lessons.