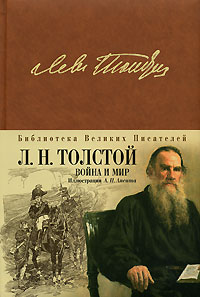 If reading War and Peace in the original is your goal to be achieved at the end of your Russian course, prepare to be patient and learn some French as well as Russian...

If reading War and Peace in the original is your goal to be achieved at the end of your Russian course, prepare to be patient and learn some French as well as Russian… As your Russian tutor will tell you, Leo Tolstoy wrote the longest sentences ever, and his texts are often used to test the spelling and punctuation of native Russian speakers.

The second half of the 19th century is the time of “thick novels”, epic descriptions of the time and the people. Dickens is a classical example.

The most famous Russian epic is of course “War and Peace”: 4 volumes, hundreds of characters, about 2 thousand pages.

It’s true that you wouldn’t want to photocopy it… But is reading it worth it? Yes – if you have time and patience. Tolstoy is heavy on very lengthy sentences – a classical example of Russian writing. So lengthy that 1 sentence sometimes takes up a whole page. It is beautifully written, but it’s not the kind of thing you could read on a train or a plane, it requires time and concentration. When I was at school, our teacher in Russian lessons liked to call someone to the board and dictate a sentence from War and Peace to this luckless student who would have to write it down, trying to preserve the correct spelling and punctuation. The board was very big, covering half the wall, and the sentence would normally take up all of it. Then we would have to dissect it, finding the subject, the predicate, and all the participle constructions that might be miles away from the word they refer to. I think I would find it difficult even now!

The name of the novel “War and Peace” is a play on words. It is called “Ð’Ð¾Ð¹Ð½Ð° Ð¸ Ð¼Ð¸Ñ€” in Russian, with “Ð¼Ð¸Ñ€ – mir” meaning both “peace” and “world, society”. The main theme of the novel is the Napoleonic War of 1812 and its impact upon Russian society and the world. It has everything a great novel needs: a good plot, well drawn characters, several love stories, and one extra – philosophical discourse about history and the role of great personalities, such as Napoleon, in history. Most of the “boring” philosophical parts are in French. In modern editions all the French parts are translated into Russian in footnotes at the back of the book (unlike 19th century intellectuals, we are not expected to know French any more!) so the kids who are required to read this novel at school always (and understandably!) miss those parts. The novel reflects Tolstoy’s views on society, family, war, religion etc. And his views, just like his life and career, are rather interesting.

Coming from a rich family and being a count (by the way, his surname means “fat” in Russian – a fact that always amuses my students learning Russian in London, and his first name, “Lev” means “lion”!), Tolstoy had the luxury of being able to dedicate his life to literature and philosophy. He received a good university education, although unfinished, served in the army (in the Caucasus) for 2 years, lived in Europe for a while and then got married at the age of 34. He started a family and lived on his country estate Yasnaya Polyana (Ð¯ÑÐ½Ð°Ñ ÐŸÐ¾Ð»ÑÐ½Ð°), near the city of Tula, 3 hours by train from Moscow. He had a big family of 13 children (5 of them died as infants), and his long suffering wife Sophia often acted as his secretary, writing up edited copies of his novels (let alone photocopying, she had to copy them by hand!!)

A Russophile and an aristocrat ploughing his own land

In Yasnaya Polyana, he ran a farm and founded a school for peasants’ children. At this time, Tolstoy became famous for his Russophile views, believing that Western ways of life and agriculture would not be acceptable for Russians, because Russia follows its own way. Unlike other Russian liberal intellectuals, who thought that the peasants should be enlightened and elevated to their level, he thought that it should be the other way round: middle classes should learn from the people who work on the land. Peasants are better, more authentic people than intellectuals. He decided to look and live like a simple farmer who ploughs his own land. He grew a beard and wore peasant clothes (hence his peculiar look in later portraits). He taught peasant kids at school and wrote didactic stories for them. He also got into trouble with the Russian Orthodox church (as serious as excommunication!) for advocating his own brand of religion which became known as “tolstovstvo”. Its main principle is non violence and not actively resisting violence.

In 1910, being already in his 80-s, secretly from his family, he left home and went on a journey somewhere, but caught pneumonia on the way, and died at a small train station – a strange and unexpected death.

Tolstoy’s other big novel, Anna Karenina, is probably famous all over the world for one quotation, the opening phrase of the novel: “All happy families are alike, but each unhappy family is unhappy in its own way.” The main plot line is the life and death of the beautiful Anna who falls in love with a dashing army officer Vronsky, leaves her boring old husband and a young son, whom she misses very much, has a short spell of happiness and a daughter with the lover, but then he grows cold towards her, and she commits suicide by throwing herself under a train. A rather obvious moral tale, with the train being a symbol of the new evil era of machinery, heartless and destructive of all good things. There is another story line in the novel, describing a guy called Levin, who looks remarkably like Tolstoy himself, ploughing the fields and advocating the benefits of simple peasant life. Levin leads a very happy family life but thinks of suicide – that tells you something…

Tolstoy is a very prolific writer, and apart from those two big novels, he wrote a lot of shorter works, short stories and philosophical and religious pieces.

Interestingly, Tolstoy never considered himself a professional writer, preferring philosophical and religious interests to literary ones.

I should admit that Tolstoy is not one of my favourite authors, but here is his favourite quotation of mine: “A human being can be compared to a fraction: numerator is what he is, and denominator is what he thinks of himself. The bigger the denominator, the smaller the fraction.” His works are indeed full of wisdom, and I do recommend that you go on a journey of discovery of Tolstoy’s world. After some advanced Russian lessons, of course!