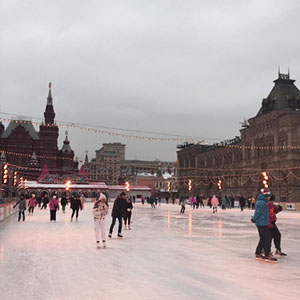 Russians like a good celebration, and the biggest celebration of the year is coming - the New Year. This is how we celebrate it.

Russians like a good celebration – any excuse to have one is welcome! If you look at a traditional Russian calendar you will see that almost every day is dedicated to someone or something: there is a day for medical workers, a day for teachers, scientists, computer programmers – every profession and sphere of activity is celebrated. On top of that, there are religious Orthodox holidays and days commemorating various historical events – so plenty of reasons for celebration! Not all these days are public holidays of course. If they were, people would not have any time to work! But generally there are more days off in a Russian working person’s year than in most other countries. And we like our days off to be a cause for celebration, not just “bank holidays”.

And, the biggest celebration of the year is the New Year one.

The biggest celebration of the year

The New Year celebration is the longest holiday “spree” of the year. Most people start celebrating on the 25th of December (the Western Christmas is a working day in Russia, but a good pretext to start a holiday season), and carry on till the so-called “Old New Year” on the 13th of January. From the 31st of December till the 10th of January most businesses and state institutions are closed, children are on school holidays, and if you need to get something done in Russia, this is not the time to go.

The New Year (and not Christmas) is the biggest celebration of the year. The New Year (Novy God) is traditionally a home celebration, when families and close friends stay at home, eat, drink, exchange gifts and watch a lot of television. The traditional food includes Russian salad (called “ÑÐ°Ð»Ð°Ñ‚ ÐžÐ»Ð¸Ð²ÑŒÐµ – salat Olivier” in Russian), as well as several other salads, pies, a meat course with vegetables and a lot of sweets and desserts.

How Russians see in the New Year

On New Year’s Eve, in all kitchens across the country people frantically chop salads and watch one particular movie, a new year romantic comedy which has been shown every New Year Eve for the last 40 years. It’s called “Ð˜Ñ€Ð¾Ð½Ð¸Ñ Ð¡ÑƒÐ´ÑŒÐ±Ñ‹, Ð¸Ð»Ð¸ Ð¡ Ð›ÐµÐ³ÐºÐ¸Ð¼ ÐŸÐ°Ñ€Ð¾Ð¼! – The Irony of Fate, or Enjoy Your Bath!” It is funny but everyone has learned it by heart… and now it’s become a tradition to show it. Here is a link, with English subtitles:

A couple of minutes before midnight the president appears on TV with a short speech, in which he outlines what happened in the country in the old year and wishes all Russians a happy new one. The Kremlin clock (the Russian equivalent of Big Ben) strikes 12, at which point glasses should be filled with champagne and people make their secret wishes for the New Year while the clock is chiming… The New Year begins with a glass of champagne and the most entertaining TV night of the year. All TV channels go out of their way to prepare the best New Year programme, inviting all the most popular pop stars, comedians and presenters, who sing, dance and joke all night.

Some people, mostly young ones, go out for the night to restaurants and clubs, or walk outside and launch fireworks. Fireworks are a relatively new trend which makes sleeping on New year’s night quite impossible. In Moscow, lots of people gather in Red Square to see the New Year in.

On the 1st of January, most of the adult population of the country wakes up very late. Streets are empty, everything is closed. Some signs of life return on the 2nd, with most shops opening and more people waking up.

The period from the 1st till the 10th of January is the official New Year time off. It’s marked, apart from the traditional Christmas/New Year decorations, by the presence of Grandfather Frost (Ded Moroz), the Russian Santa Claus, and his assistant the Snow Maiden (Snegurochka) in the streets and at numerous children’s New Year performances.

Grandfather Frost is a tall old man with a huge white beard, dressed in a satin coat trimmed with fur, with a magic walking stick that can turn anyone into a block of ice. His assistant (PA!) Snegurochka is his granddaughter, a pretty blond girl who, according to an old Slavic folklore legend, was originally made of snow and became alive with the help of some magic. The two of them go around delivering presents to children and lighting Christmas trees. There are, as you can imagine, numerous jokes about the pair and the fact that they sometimes become confused after having a few drinks.

Russian Christmas comes on the 7th of January because of the difference between the Gregorian (new style) and Julian (old style) calendars. Russia used to follow the old Julian calendar until 1918, being two weeks behind Europe! When the calendar was changed, the Russian Orthodox Church wouldn’t accept it, and all religious celebrations follow the old calendar to this day. Christmas is a religious occasion, and although it’s a public holiday, it is observed mostly by believers, and it is not as commercialised as in the West.

The most curious occasion of this holiday marathon is the “Old New Year”, the 13th of January. It’s the date of the New Year celebration before the calendar was changed in 1918, and it’s not a significant date but usually a day to remember old friends and see one’s family. This day is the last chance to celebrate the New Year, also welcomed by religious people who observe a Christmas fast (since Russian Christmas comes after the New Year). Also, there is a tradition of divination on the old New Year Eve, in order to try and see what the New Year will be like. Dreams on that night are deemed to be significant.

Whatever your plans are for the New year celebrations, Have a Happy New Year! Ð¡ ÐÐ¾Ð²Ñ‹Ð¼ Ð“Ð¾Ð´Ð¾Ð¼! We look forward to seeing you in our Russian lessons in the new year!