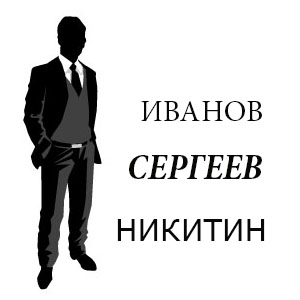 While learning Russian, working and socializing with Russians, reading Russian literature, we come across a lot of Russian surnames. This is an interesting subject that you will probably not touch upon in your Russian lessons. So here is a bit of information about our surnames.

In this blog, I have already written about the system of Russian names and the meanings of Russian first names. So to complete the theme, and to supplement your Russian course, here is a bit of information about our surnames.

When do we use surnames?

In Russian, someone’s surname is one of three components of a person’s full name, the other two being the Christian name and the patronymic (see my blog on Russian names). Surnames are used only in formal situations, mostly in writing, often preceded by “Ð“Ð¾ÑÐ¿Ð¾Ð´Ð¸Ð½” (Mister) or “Ð“Ð¾ÑÐ¿Ð¾Ð¶Ð°” (Miss/Mrs). Generally, calling someone by their surname is not a very friendly thing to do. It reminds one of being at school or being told off by a strict boss on one’s first day at work.

What we know about the history of Russian surnames

Surnames in Russia were introduced relatively late. According to a census of 1897, 75% of the population of the Russian empire did not have surnames. Most of these people, however, were citizens of the ethnically non-Russian regions of the empire. It was only long after the revolution of 1917, in Soviet times, that a hundred percent of the population got official surnames and passports.

In Russia itself, which was an agricultural country, the majority of the population until 1861 consisted of peasant serfs, almost fully dependent on their lords. They had very few rights, were obliged to work on the lord’s fields and pay a monthly contribution (wheat or other commodities) and could even be bought and sold. Until 1861, when serfdom was abolished and the peasants became free, most of them did not have surnames. For official documents, if necessary, it was enough to mention the village a person was from, or the name of their lord, or the first name combined with profession/occupation.

The first Russians who acquired surnames were the citizens of the great city of Novgorod in the middle ages, the first Russian democratic city-state, later destroyed by the Tartar Mongolian invasion.

The origins and the derivation of Russian surnames

Most surnames were derived from patronymics or nicknames related to a person’s occupation, place of dwelling or a physical peculiarity. Kuznetsov (from the word ÐºÑƒÐ·Ð½ÐµÑ†) is a smith, for example, and Sapozhkikov (from the word ÑÐ°Ð¿Ð¾Ð³) is a boot maker.

Very often family names are derived from Christian names. Grammatically, they are possessive adjectives with the suffixes “ov”, “ev” and “in”. Which suffix to use is determined by a phonetic rule, depending on whether the name it is derived from ends in a vowel or consonant. Hence, there are a lot of Mikhailovs, Ivanovs and Nikolaevs in Russia (meaning, the son, or the descendant of Mikhail, Ivan or Nikolay). To form a female surname, we add the ending A, so you always know (in writing, for example) whether you are dealing with a man or a woman.

In the Russian tradition, married women usually take the surname of their husband. However, this has not been a legal requirement since 1918. Nowadays, more and more women get married later in life and keep their original surname, simply because it is too much of a hassle to change it.

Russia being a land of forests and rich wildlife, you will find a lot of surnames derived from names of plants, animals and various weather conditions. We have countless Volkovs (wolf), Zaitsevs (hare), Morozovs (frost), Sinitsins (blue tit), Medvedevs (bear), Kozlovs (goat), Korovyevs (cow) and so on and so forth. There even some Svinyins (pig)! Amusingly, there are rather unpleasant sounding surnames around, sometimes even derived from swear words, which always made me wonder – why don’t those people change them? It is easily done, after all – you go to the register office/passport authority, pay a fee and choose any surname you like!

Another group of Russian surnames came from geographical names, church holidays and saints’ names, with the help of the suffix “ÑÐºÐ¸Ð¹ – skyi”. This suffix is normally used to form adjectives from place names, e.g. Moskva – moskovsky (Ð¼Ð¾ÑÐºÐ¾Ð²ÑÐºÐ¸Ð¹). Some examples of such names are Rozhdestvensky, Smolensky, Nikolsky. Historically, such names are related to clergymen, or western Russian Lithuanian aristocracy (from the great Lithuanian Principality). They sound pretty and “posh” to a Russian ear.

Yet another group of surnames is derived from old pagan Slavic names that came about before the introduction of Christianity in the 10th century: Zhdan (waited for) – hence, Zhdanov; Liubim (beloved) – hence Liubimov. Interestingly, some of those names are “negative” – “Nekrasov” (not pretty), Durov (stupid), Chertanov (devil). It can be explained by the fact that in the old times people were given names describing negative characteristics in order not to tempt fate, to keep away evil spirits. Negative names were supposed to fulfil their meaning in the opposite way – A Dur (Ð”ÑƒÑ€ – studid) will grow up smart, and a Nekras (ÐÐµÐºÑ€Ð°Ñ – not pretty) – will be handsome.

Surnames in the ex-Soviet countries

Most surnames in the ex-Soviet republics, the Caucasus and Central Asia (they all used to be part of the Russian empire and later the Soviet Union) have Russian endings because Russian civil servants in the 19th and the 20th century created and wrote down people’s surnames, forming them according to the Russian system.

10 most common surnames in Russia

Translations of some famous Russian surnames:

This is rather amusing:

Tolstoy – derived from the word “fat” – Ñ‚Ð¾Ð»ÑÑ‚Ñ‹Ð¹
Pushkin – derived from “Ð¿ÑƒÑˆÐºÐ° – pushka” – a cannon
Putin – from the word “Ð¿ÑƒÑ‚ÑŒ – Put” – a way or a road.
Medvedev – a typical Russian surname meaning “bear” (Medved’ is a bear)
Stalin – a man of steel. It is a revolutionary pseudonym, his real surname is a Georgian one – Dzhugashvili
Lenin – another adopted name, taken from the river Lena in Siberia where Lenin spent some time in exile. His real surname is Ulyanov.
Chekhov – it sounds like it comes from the nationality “Czech”, or from a family of Czechs
Molotov – a hammer

All this said, there are of course a lot of foreign surnames in Russia – German, Polish, French, let alone surnames from all over the vast Russian empire and later the Soviet Union: Ukraininan (ending in –ko), Byelorussian (ending in –vich), Georgian (ending is –shvili or -adze/idze), Armenian (ending in – yan/-an) and many others. Interestingly, female surnames ending in a consonant, and thus looking like male surnames, do not grammatically change, staying the same in all grammatical cases.

It is of course not always important to understand the meaning of surnames but sometimes they can tell you quite a lot about a person’s background. Also, reading Russian literature, you will come across a lot of “descriptive names”, chosen by the author to characterise the person. This literary trick is especially loved by Gogol and Chekhov. There are a lot of funny surnames in Chekhov’s short stories, for example.

There is a famous short story by Chekhov called “Ð›Ð¾ÑˆÐ°Ð´Ð¸Ð½Ð°Ñ Ñ„Ð°Ð¼Ð¸Ð»Ð¸Ñ” – A Horsy Surname, about an army general who had a bad toothache and had to rememeber the surname of a guy who could treat teeth with a magical spell. The only thing that he remembered was that the surname was related to horses somehow. He and his whole family and household members were obsessively recalling different possible surnames for a long time. The only thing that they knew was that the surname was related to horses somehow. So in the end it turned out to be Ovsov – Oats! But alas – it was too late. By that time the tooth had already been extracted!

Here is the link, if you are interesed: http://lib.ru/LITRA/CHEHOW/loshad.txt_with-big-pictures.html