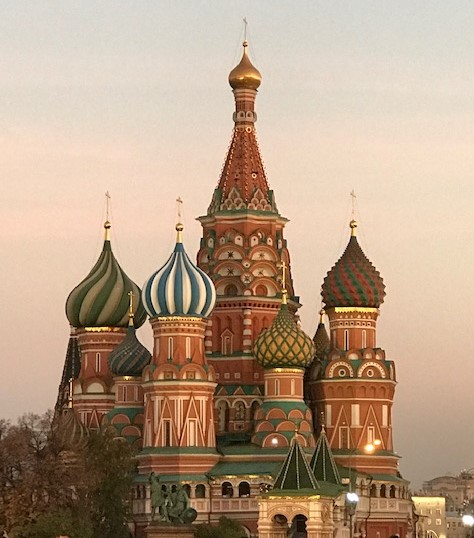 Going to Russia? Whether it is a pleasure or business trip, these tips will help you feel more comfortable while travelling in Russia. Some of the tips are applicable to Moscow only, since I am a Muscovite!

If you’re planning to get around on your own, your life will be much easier if you learn the Cyrillic alphabet. Most street signs and signs in the public transport are not translated into English. However, in the recent couple of years, Moscow street names have been translated into the Latin script. Plus, the stops on the tube are now announced in both Russian and English.

There are ten time zones in Russia. Moscow and St. Petersburg are supposed to be three hours ahead of London. But Russia does not change from winter to summer time any more. So from the end of March till the end of October the time difference between the GMT and the European part of Russia is 2 hours. And in winter it is 3 hours.

3. You will need to get a visa

Every westerner traveling to Russia needs a visa. Visit the website of the Russian Embassy in the UK for the necessary information. Visas can be obtained through the Russian Tourist Office in London. They are not cheap, unfortunately. If it’s any consolation, getting a British visa in Russia is more difficult and more expensive!

4. Have somewhere to stay

When you arrive in Russia, you will need to fill in an immigration card, stating where you are going to stay, and for how long.

5. Carry your passport with you

it’s a good idea to carry your passport with you at all times. There is no law that obliges everyone to do that, but random checks are carried out by the police occasionally, so having your passport with you will help avoid any questions. Following the terrorist attacks in Moscow and St Petersburg in the recent years, there is a lot of police presence in public places.

6. Currency to take to Russia

Which currency to take? The best bet is to take roubles (you can get them in London now) or American dollars or Euros (to be changed into Euros when you are in Russia), if you prefer to take cash. You will find banks and small bureaux de change everywhere in big cities where you can exchange dollars or Euros into roubles and vice versa. However, British pounds are not easy to change, as only certain big banks can do it. Do not change money at airports, as the rates of exchange there are much lower than in town.

In big cities you will find cash machines that accept all major credit and debit cards. Practically all shops and restaurants will accept credit cards.

Moscow taxies look like New York ones, they are yellow/orange. There are a lot of taxi companies, including Uber, Yandex taxi (24-12) and others. In Moscow you can get a taxi using a mobile app, or more conventionally call them on the phone. There is a lot of competition in this market at the moment, so the prices have gone down a lot in the last couple of years. If you need to take a taxi from the airport on arrival, call one in advance (or ask a Russian friend/colleague to do it for you), and they will meet you. There are a lot of taxi drivers offering their services at the airport, but I would not advise using them. They are likely not to be a proper licensed taxi.

The taxi fare from central Moscow to either Domodedovo or Sheremetyevo airport should be around 1500 roubles. (2018)

That said, if you do not have much luggage, there is an excellent train service from both international airports to the city centre in Moscow. It’s a red train called Aeroexpress. A single ticket costs 500 roubles. (2018)

The best way to get around Moscow is by metro. It’s big, fast, reliable and cheap. The price of one journey is 55 roubles (1 pound sterling is 80 roubles – 2018). You can buy tickets for 1, 2, 5, 10 or 20 journeys. It’s a bit cheaper to buy a card for several journeys in advance. The price does not depend on your destination, it’s fixed for the whole metro system. Alternatively, you can get the Troika card (the Moscow equivalent of Oyster) and put as much money as you wish on it. You can use Troika on all public transport.

The Moscow metro doesn’t work quite like others you may be familiar with. Instead of having stations that have platforms serving several different train lines, every platform on the Russian metro is regarded as a station in itself. Thus when you transfer from one line to another, you’ll find yourself following signs not for another train line, but for another station! Don’t worry: this may sound confusing, but it’s actually very logical and you’ll get the hang of it. If you do get lost, try to enjoy it – the Moscow metro is one of the great engineering marvels of the world and is extremely beautiful. The system opens at 6 am and closes at 1 am.

Russians do not have a comfort zone like the Brits or Americans do. So people will get very close to you on a crowded train or bus. Don’t take it personally! But if you do mind being pressed against someone’s chest or back, avoid taking public transport in rush hour.

Traffic jams can be horrendous in the centre of Moscow at any time of the day. You have been warned. Try to use the tube whenever possible, and you will get there faster, and will see some pretty tube stations!

Museum tickets are much more expensive for foreigners than for Russian people, and it’s official (unfortunately). No one checks your documents though, but the people who sell them have a trained eye for spotting foreigners! If you can pass for a Russian by taking to them, you definitely don’t need Russian lessons from us anymore!

12. Cars and pedestrians in big cities

Muscovites, like Parisians, drive like lunatics. However, people’s driving is gradually becoming better. In the past, pedestrians officially did not have right of way on pedestrian crossings, but they do now. In the last five years, big fines have been introduced for breaking this rule, so it is largely observed. But still – be very careful crossing roads.

13. Beware of pickpockets and beggars

Like any big city, Moscow has its dangers for visitors. Beware of pickpockets who can be very skilful, and beggars, who may be aggressive. In the city centre, it’s generally safe for tourists whatever the hour.

14. Russian weather between November and April

If you’re visiting Moscow between November and April, bring appropriate clothing – it can be very cold! Importantly, make sure you bring waterproof footwear: occasional thaws can make the streets very dirty and slushy. Be very careful with flights of steps: many of these are made of granite, which is astonishingly slippery in the frost.

I wouldn’t advise it, unless you are an extremely experienced, cool, stress resistant driver. People drive, as noted above, like lunatics. Roads can be rough, and in winter you would have to drive on snow and ice. So spare yourself the pain! Take a taxi or public transport instead.

It’s not in the Russian culture to smile at strangers, so people may seem gloomy, but appearances are deceptive. Most of them would be happy to help a visitor, show the way, give directions, answer questions. Russians are extremely hospitable and respect guests. Young people are more likely to speak English. So do ask for help if you need it!