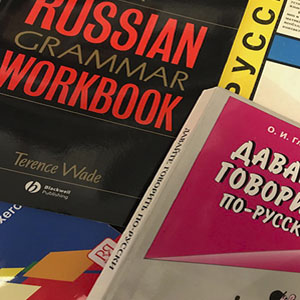 Russian grammar at the beginner level

I hate to say it, but most English speakers who have never learned a Slavic language before underestimate the complexity of Russian grammar. The reason is that in a beginner Russian course grammar is usually presented in a simplified way while the course is centered around vocabulary, useful phrases and reading skills. This is a totally justified approach because for a beginner it is more important to get to grips with the alphabet and basic vocabulary than to tackle grammatical complexities. Also, at the beginner level in Russian some grammar aspects are actually easier than in Western European languages. For example:

• The verb “to be” is not used in the present tense, which makes a learner’s life much easier. So if you want to say “This is a table”, all you have to say is “This table” – as simple as that. Or, “I am a student” equals to “I student”. All you have to do is FORGET about “am”, “is”, and “are”, rather than learning those forms. How good is that?!

• There are no articles “a” and “the”, so again, all you have to do is forget about them. Unlike Western European languages, Slavic ones do not have articles. The whole concept is completely alien to us, and Russians who are learning English always struggle with using “a” and “the” correctly. If you listen carefully to a native Russian speaker talking English (especially someone whose English is not very advanced!) you will notice that some articles are missing, and some will probably be used incorrectly and inconsistently.

• There are very few irregular verbs. The overwhelming majority of verbs conjugate in a regular way, sometimes with small variations. For comparison, while learning English as a foreign language, you have to learn about 120 irregular verbs (3 forms) by heart!

What kind of language is Russian?

Russian belongs to the Indo-European family of languages, the same one as all Western European languages, so all the grammar concepts are familiar and easy to understand. In fact, its grammatical composition is very similar to Latin. So for those students who are familiar with Latin grammar, Russian grammar will be nothing new.

The complexity of Russian grammar lies in the fact that grammatical forms are incorporated in the word itself, unlike in English where a lot of auxiliary words are used and grammar forms consist of several words rather than one. So as a result, the minute you reach an intermediate level, you will have to learn a lot of endings for different parts of speech and operate little logical sequences in your mind, of the type: this is a noun, it’s masculine, it’s singular, it must be the genitive case, so the ending is – “A”! It means that you’ll be doing a lot of memorizing and a lot of practice.

On a positive side, it’s a great exercise for your brain and memory! After a while, once you’ve said the same thing a hundred times, it becomes automatic, and you don’t have to strain your brain any more. As the saying goes: “Repetitio est mater studiorum – Repetition is the mother of learning”.

The key features of Russian grammar

• Gender, which is very important for Russian grammar. There are 3 genders – masculine, feminine and neuter. Masculine and neuter words have the same endings in most cases, and feminine ones have different endings.

• Case: there are 6 cases: Nominative, Accusative, Genitive, Dative, Instrumental and Prepositional (Locative). Each case has certain meanings attributed to it, which are quite logical and correspond to the Latin case system (for example, Genitive is the same as possessive, and Accusative is for direct object etc). Changing the word ending for case is called declension. In Russian, practically all parts of speech decline: nouns, pronouns, adjectives, and even numerals. They all have their own endings in different cases. The only part of speech that does not change is the adverb.

• There are 3 types of declension for nouns, depending on their gender and the type of ending in the nominative.

• Adjectives do not have their own gender or type of declension. They follow those of the noun they “belong to”.

• Verb categories include the 3 tenses – present, past and future, and 2 aspects – perfective and imperfective. In the present tense, verbs conjugate (that is, change their endings according to the person of the subject – I, you, he, etc), and you will have to learn 6 personal endings in the present tense. There are 2 types of conjugation but they are very similar. Most verbs are regular, which is good news! The past tense is really simple: there is no conjugation. Instead, there is a very simple set of endings for masculine, feminine, neuter and plural. In the past and the future, there is a choice of 2 aspects: imperfective for regular or long actions, and perfective for short and completed ones. The future tense is the most complicated one: there are 2 kinds of future, depending on whether you need to use an imperfective or perfective verb.

All this may sound complicated, but it’s logical and generally the verb system is easier than in English! The only down side is that every time you learn a new verb you will have to learn “two for the price of one” – the imperfective and perfective infinitive forms.

• Conditional mood is very simple. It is basically the same as the past tense, with the addition of one little word Ð‘Ð« that stays the same. And there is no subjunctive!

The most grammatically complex part of speech is the participle. Participles have every conceivable grammatical category: they can be perfective or imperfective, past or present, passive or active, and they have genders and cases and decline like adjectives. A complete language student’s nightmare! The good news though is that they are a feature of written and formal style, so we don’t use them much in colloquial speech.

Another difficult subject in Russian is the verbs of motion. The Russian language is very specific when we describe motion and travelling: we use different verbs for travelling on foot and by transport, for going in one particular direction and going somewhere regularly. Combined with different prefixes that modify the meaning of the verbs of motion (in the same way as English prepositions do: to go away, to come in, to pop round etc), they present a whole system of grammatical forms that need to be understood and learned.

Another interesting feature of Russian grammar is that the word order is flexible, and you can put words in a sentence wherever you want, without being incorrect. You can say “I know him” or “I him know” or even “Know I him” or “Him I know” and all these phrases will be grammatically correct. The former two are completely interchangeable, and the latter two are emphatic, with the word in the 1st position in the sentence being the most important. So in Russian it’s more about using the correct case and ending, than sticking to the fixed word order!

Is Russian grammar difficult to master?

As a teacher who has been running Russian courses for many years, I can assure you that while Russian grammar is highly “synthetic” (all based on endings and word changes), it is also logical and can, no doubt, be learned and used very successfully by anyone who is willing to dedicate some time and effort to it. As you can see from the description above, it has its moments, but it also has some simple features. The complicated system of cases for nouns, adjectives and pronouns is balanced out by a relatively simple system of verb tenses and the absence of subjunctive.

Russian grammar has of course been changing through the centuries. Just like all modern languages (and English especially!) it has a tendency to become simpler. For example, we used to have 7 cases and somewhere along the way we have lost one – the Vocative case, which other Slavic languages still have.

It is worth it!

Let me also assure you that it’s worth it. You will be rewarded when you have mastered the complexities of Russian grammar and can appreciate the beauty of the language. Russian is not a verb-based language, so not a language of action, like English. Russian is great for poetry, songs and literature and less good for business correspondence. That is why all Russians love poetry: it is romantic, musical, often sad but soothing. It’s a language of contemplation and description, which perhaps reflects the Russian national character. But that’s quite another story and a topic for another article.

So, good luck with your Russian lessons, and happy learning! And remember that even if you don’t get it 100% right, people will still understand you and will appreciate your effort!