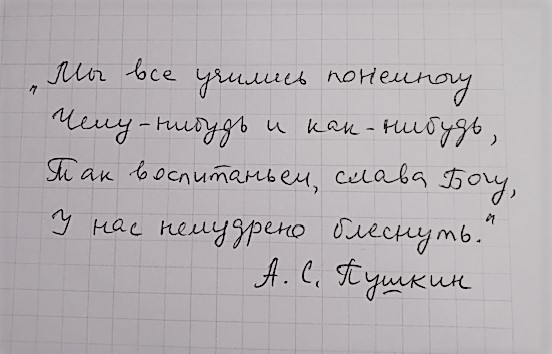 Russian handwriting: to write or not to write

Any typical beginner Russian course starts with the introduction of the Russian Cyrillic alphabet. Our students learn the printed letters, start reading in Russian (which is usually exciting!) and then discover that there is another form of the same alphabet - the handwritten one!

The use of proper handwriting is becoming quite rare

In the past, writing legibly by hand was a practical necessity. But now, with the advance of modern technologies, people hardly ever write by hand. Handwriting is reserved for making informal notes, post cards, shopping lists and other rather trivial things. So strictly speaking, a learner of Russian does not need to master it. But it’s a nice touch if you do. I must admit, my own handwriting has deteriorated a lot: it has become less pretty, less consistent, less joined up. I cannot even remember last time I had to write a long-ish text by hand. However, every now and then the cursive style of writing is used in menus, business cards, advertising boards, just to make it look pretty and interesting. So in those cases, it pays to learn it.

To be fair, it’s not really even that different. Out of 33 letters there are about five that are completely different in handwriting: Ð¢, Ð”, Ð“, ÐŸ, Ðœ.

The rest are just curvy versions of the same, with little tails extended to neighbouring letters, to join them together. After all, the main purpose of the handwritten style is to make writing by hand quick and fluent by joining all the letters seamlessly. And, done properly, a whole word should be written without taking your pen off the paper. All educated Russian native speakers can still do it if asked, but would not bother in real life. The skill of calligraphy is now almost dead in English (at least, according to my observation), and is definitely dying in Russian. The younger generation don’t care any more. And I can totally understand it – there is no point in sweating over perfecting your joint up writing if you type everything, or even dictate it to your smartphone!

Some people’s writing is absolutely illegible, with the most notorious examples supplied by doctors. In the old days, I would always ask the doctors to explain what they have written on my prescription, and then would rewrite it myself before I forgot! Yes, that bad…

Famous Russian writers didn’t excel in producing legible texts either. Looking at Pushkin’s writing, for example, a modern reader can only guess some of the words and would struggle to read whole sentences fluently. Russians joke that an illegible handwriting is a sign of a genius. So do not be discouraged if you see a piece of Russian handwriting that you cannot decipher. Chances are that Russian native speakers would not be able to read it either! I have been asked, on several occasions, to help “decipher” passages from family archives and old letters in Russian, where I could only vaguely guess the meaning using deduction and logic, rather than the knowledge of the alphabet…

When I look at a piece of Russian handwriting, I can usually make assumptions about the author’s gender, age, level of education and sometimes character. So it would be a pity to lose that additional source of information about the people you are dealing with. But – times change, and we change with them. At this day and age, you can learn Russian to a good standard without ever using the handwriting style of writing. It would look odd to Russian native speakers if you wrote by hand in block capitals, but could be seen as simply eccentric!

When mastering the hanwritten style of writing is important

All that said, I have never taught anyone advanced in Russian who would not be able to understand a handwritten or cursive text. It’s just part of the process of learning to get used to various forms of writing, and the more examples of it you see, the easier it becomes to understand and to master. Also, writing legibly by hand is still a requirement for formal Russian qualifications: the GCSE, the A-Level, the TRKI. So if you plan is to do one of these, it’s a must.

Either way, we look forward to seeing you in our Russian classes in London!